He is well balanced, elegant and sleek looking. He have a long, graceful and compact body. His neck is graceful with a black nose, dark to black, small, almond shaped eyes and high ears that are at the back of his skull which are proportionated and close together.

His coat is thick, close and smooth which gives him a glossy appearance. He is black and tan while the tan is predominately on his lower legs and nuzzle. As he ages the black stretches into the areas that are tan. 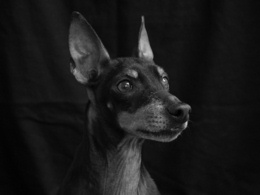 
The Toy Manchester Terrier is easily trained but requires a firm hand and early socialization.

They make great family dogs if you don't have small children as like most toy breeds he can be hurt easily. They are a good choice for the elderly because they don't need much exercise or grooming. They make a good watch dos but of course not a guard dog.


They only acquire occasional brushing and a bath when necessary.


Their nickname is "rat terrier". They got this name because they had a reputation for controlling the rat population in England. They are one of the oldest English breeds dating back to the 15th Century. They are descended from Old English Black and Tan Terrier. They are a smaller version of a Manchester Terrier. They became popular in the reign of Queen Victoria.

They are known as the Toy Manchester Terrier in Canada and the United States. They were recognized by the ADC in 2000.