Bolognese dogs descended from Bichon’s of southern Italy. They were developed in the 11th and 12th centuries and were very popular in the 1500’s with the nobility. Two hundred year ago, they were brought to Britain. They are one of the few true Italian dog breeds. These dogs are well muscled, but small and compact and resemble a Bichon Frise but are squarer and finer boned. They have distinctive white, fluffy long coats, which fall in loosely open ringlets. Their coat has a wooly texture to it when touched.

They have a small, black button nose, large and dark eyes, ears that set quite wide apart and a tail that is set high over their back. They have no undercoat so they do not shed and are considered a hypoallergenic dog. 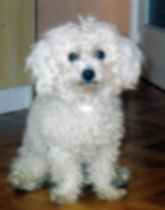 The Bolognese dog is easily trained, very intelligent, eager to please, obedient, happy, friendly, cheerful but also serious. They are playful but not as much as a Bichon. These dogs bond closely with their owner and will fellow them from room to room. They love companionship of people!

They are reserved with strangers but get on well with children and other dogs. They are not a yappy dog but will alert owner of anything new or unusual.

They, however, like the Bichon are difficult to housebreak so crate training is necessary.

If left alone to much they tend to have separation anxiety. They make good apartment dogs and will get enough exercise playing but love walks.

The Bolognese needs to be groomed daily as their hair tangles easily. They need to be bathed regularly and professionally groomed monthly is recommended. In addition, their ear canals need to be watched to remove excess hair.

They are a healthy breed – no known genetic illnesses.

They should be socialized at an early age or may become timid and shy. Therefore, they need exposure to sights, sounds and people early on.

The Bolognese are hard to find and even rare in Italy. They also cost a lot - $1000.00 and up. They are an uncommon breed in the U.S. The United States does not have a kennel club although Canada and England do to promote this breed.